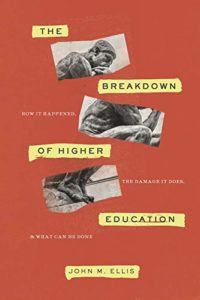 The Breakdown of Higher Education

The Breakdown of Higher Education: How It Happened, the Damage It Does, and What Can Be Done, by John M. Ellis. This provocative book provides a sobering analysis of what is unfolding on college campuses today—a phenomenon similar to that which Barb experienced in her past work with the Soviet communists. (All of which ultimately led to Chernobyl, because censorship under communism reigned supreme.)  Key graf: “Censorship on college campuses concerning questions where the opinions of thoughtful people differ is contrary to what we have always thought about higher education. Until recently, universities dealt in precise argument using evidence that is systematically gathered and carefully analyzed—not in ruthlessly enforced uniformity of opinion based on arbitrary political dogma. That is exactly the kind of anti-intellectual behavior that we expect universities to remedy—it’s what we have them for. If those institutions now routinely resort to this irrational thuggery, what is the point of them? We already see enough of that in the wider world. Academics who behave in this way are really telling us not only that they don’t do university-level thinking, researching, or analyzing of issues, but that they won’t allow anyone else on campus to do it either.”  The Breakdown of Higher Education explores, in great detail, the consequences in higher education of Pathological Altruism.

Order The Breakdown of Higher Education

You can order The Breakdown of Higher Education, using a retailer below