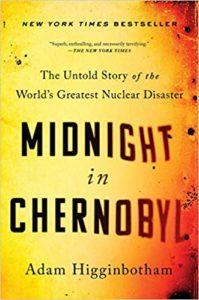 Midnight in Chernobyl: The Untold Story of the World’s Greatest Nuclear Disaster

Midnight in Chernobyl: The Untold Story of the World’s Greatest Nuclear Disaster, by Adam Higginbotham. This extraordinary book tells of the Chernobyl nuclear power plant disaster—but it is also a powerful testament to how governmental propaganda and secrecy can cause these types of global-scale disasters to unfold.

The surprisingly positive upshot of the disaster is that far safer nuclear power is being developed.  As Higginbotham notes: “Less than a month before the explosion of [Chernobyl] Reactor Number Four in 1986, a team of nuclear engineers at Argonne National Laboratory–West in Idaho had quietly succeeded in demonstrating that … the integral fast reactor … was safe even under the circumstances that destroyed Three Mile Island 2 and would prove disastrous at Chernobyl and Fukushima. The liquid fluoride thorium reactor (LFTR), an even more advanced concept developed at Tennessee’s Oak Ridge National Laboratory, is fueled by thorium. More plentiful and far harder to process into bomb-making material than uranium, thorium also burns more efficiently in a reactor and could produce less hazardous radioactive waste with half-lives of hundreds, not tens of thousands, of years. Running at atmospheric pressure, and without ever reaching a criticality, the LFTR doesn’t require a massive containment building to guard against loss-of-coolant accidents or explosions and can be constructed on such a compact scale that every steel mill or small town could have its own microreactor tucked away underground. In 2015 Microsoft founder Bill Gates had begun funding research projects similar to these fourth-generation reactors in a quest to create a carbon-neutral power source for the future. By then, the Chinese government had already set seven hundred scientists on a crash program to build the world’s first industrial thorium reactor as part of a war on pollution. ‘The problem of coal has become clear,’ the engineering director of the project said. ‘Nuclear power provides the only solution.’” [Hat tip: Mary O’Dea]

We read Midnight in Chernobyl in conjunction with watching the HBO documentary Chernobyl.  Television doesn’t get better than this.

Order Midnight in Chernobyl: The Untold Story of the World’s Greatest Nuclear Disaster

You can order Midnight in Chernobyl: The Untold Story of the World’s Greatest Nuclear Disaster, using a retailer below