Barbara Oakley’s riveting portrayal of espionage, lust, comic adventure, hard work – and harder drinking – brings to life a little-known episode of American history when two cold-warring nations got together to fish the north Pacific. The joint fishing venture saw a brief period of success during the 1980s when Americans caught fish within the two-hundred mile maritime limit, then passed them off at sea to Russian processing trawlers. Oakley served as a translator aboard the processing ships, and Hair of the Dog is her true-life story of volatile Russian and American fishermen forced to work together.

Barbara Oakley proved to be a resourceful translator – one who could silence the KGB with a squirt gun or handle a mob of drunken Russians seeking nirvana at K-Mart in downtown Portland. She is an equally imaginative author who has provided one of those rarest of book finds: a reflection upon an unknown world; and entertaining tale of adventure; and a thought-provoking examination of the intertwining consequences of fanaticism, greed, and opportunity. 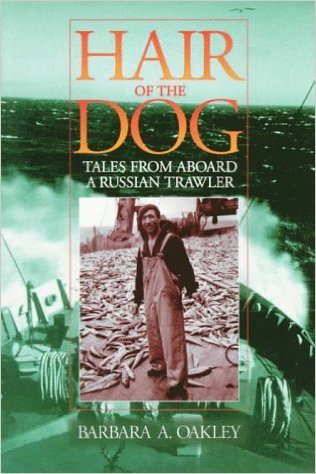 Reviews for Hair of the Dog

"The always revealing, sometimes explosive and often hilarious world of Oakley's joint venture is told with a dry wit that never obscures the characters. It's a book any reader is sure to drink up."

Order Hair of the Dog

You can order Hair of the Dog, using a retailer below