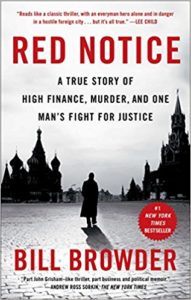 Red Notice: A True Story of High Finance, Murder, and One Man’s Fight for Justice

Book of the Month

It can sometimes be important to step back and look at society’s impact on how we learn and grow.  Bill Browder’s magnificent best-seller Red Notice: A True Story of High Finance, Murder, and One Man’s Fight for Justice tells the story of the impact of highest level corruption on ordinary people’s lives.  (This book has an amazing 5-star rating with over 2600 reviews on Amazon.) Browder was the co-founder of Hermitage Capital Management, which specialized in Russian investments.  In the course of his work, Browder became a victim of a kleptocratic part of Russia’s economy, where the rule of law can be rewritten on a whim.  The book’s cover notes “A financial caper, a crime thriller, and a political crusade, Red Notice is the story of one man taking on overpowering odds to change the world, and also the story of how, without intending to, he found meaning in his life.” We agree—we couldn’t put the book down.

On a side note, we often think that relentless focus is the best way to learn and be successful. Along those lines, we often tout Cal Newport’s Deep Work.  But as Browder notes, Edmond Safra, one of the world’s greatest investment bankers, could evince an almost gnat-like attention-span.  If you have trouble keeping your focus on just one thing, it may sometimes be an advantage.

Order Red Notice: A True Story of High Finance, Murder, and One Man’s Fight for Justice

You can order Red Notice: A True Story of High Finance, Murder, and One Man’s Fight for Justice, using a retailer below