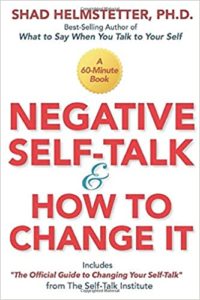 Negative Self-Talk & How to Change It

Negative Self-Talk & How to Change It, by Shad Helmstetter.  After reading about how one of Caesar’s assassins, Brutus, shifted himself from probable victory into suicidal defeat at the Battle of Philippi, (at least as detailed in The Last Assassin),  we became interested in negative self-talk. Helmstetter’s short, uplifting book tackles an important issue––how we talk to ourselves makes a big difference in how we feel about ourselves, how we interact with others, and ultimately, how successful we are, at least according to however we define success.  As Helmstetter notes, “The problem is that Negative Self-Talk Disorder is an unconsciously acquired disorder that becomes physically, chemically, wired into your brain. (It becomes an actual disorder–faulty wiring–in the brain.) If you do nothing to change it, it not only stays, it also gets progressively worse. It becomes a part of your programs, and follows the rules under which your brain operates. Imagine meeting a sour, pessimistic, down-in-the-mouth person who is negative about everything. When you meet someone like that, it is clear that person did not suddenly become a negative, unhappy person overnight. People who are super-negative––whether they are aware of it or not–have worked at it. Probably for years. Day after day, thought after thought, they have, usually without knowing it, wired their brains to see the world in a darker, more insecure, less enlightened and optimistic way.”

If you’re looking for ideas about how to get yourself out of a negative way of treating yourself, even though it’s a bit of a self-promotion for his audio materials, Helmstetter’s book is a good place to start.

Order Negative Self-Talk & How to Change It

You can order Negative Self-Talk & How to Change It, using a retailer below