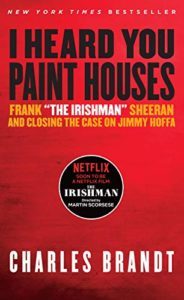 I Heard You Paint Houses: Frank “The Irishman” Sheeran & Closing the Case on Jimmy Hoffa

I Heard You Paint Houses, by Charles Brandt. Living in the Detroit area, we’ve heard stories over the years about corrupt union activities. So we read this book when not long after it first came out in 2004. It was a riveting read then, and apparently, it’s even more riveting in the most recent edition. As one of the book’s endorsements notes: “Sheeran’s confession that he killed Hoffa in the manner described in the book is supported by the forensic evidence, is entirely credible and solves the Hoffa mystery.”- Michael Baden, M.D., former Chief Medical Examiner of the City of New York. Highly recommended if you want to get a feel for the seedy underside of union life.