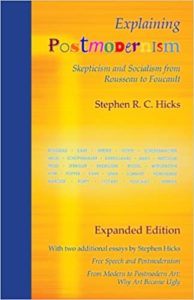 Explaining Postmodernism: Skepticism and Socialism from Rousseau to Foucault

Explaining Postmodernism: Skepticism and Socialism from Rousseau to Foucault (Expanded Edition), by Stephen R. C. Hicks.  We read this marvelous book some years back, when it was in its first edition, and are delighted to now see the book is now out with a new, expanded version that is, as we type this, now available on Kindle for free. (The expanded essays include “Free Speech and Postmodernism” and “From Modern to Postmodern Art: Why Art Became Ugly.”  Hicks has a wonderfully readable style that makes complex philosophical ideas more comprehensible to us mere mortal, non-philosopher types.

True story: Barb was talking to a fellow colloquium attendee who seemed keenly aware of philosophy. She mentioned she only really felt she understood and enjoyed one book about philosophy, but for once she couldn’t remember the title or author. She dutifully reported back after break that the book was Explaining Postmodernism, by Stephen Hicks.  “Oh,” said Barb’s conversant. “That’s nice to hear, because I’m Stephen Hicks.”