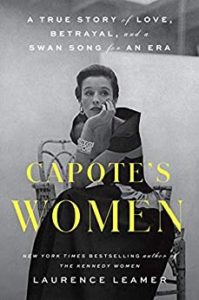 Capote’s Women: A True Story of Love, Betrayal, and a Swan Song for an Era

Capote’s Women: A True Story of Love, Betrayal, and a Swan Song for an Era, by Laurence Leamer.  Truman Capote was one of the most fascinating characters of the twentieth century.  So this book proved irresistible for us.

Capote was a raconteur of the first order, and he parlayed his story-telling skills not only into a career as a novelist, but also into calling cards that made him a popular houseguest amongst the wealthy.  Over time, Capote began to realize that his awareness of the world of enormously wealthy, fashionable women could be used as fodder for his writing. Just as he took advantage of the confidences of murderers in his classic, In Cold Blood, Capote ruthlessly set about milking his wealthy female friends for their thoughts—thoughts he could put on the page to sell books, even as these publicly shared confidences would destroy his deepest friendships.  A real page-turner that is a biography not just of Capote, but of some of the world’s wealthiest, intelligent, best-dressed, but often trapped women.

Order Capote’s Women: A True Story of Love, Betrayal, and a Swan Song for an Era

You can order Capote’s Women: A True Story of Love, Betrayal, and a Swan Song for an Era, using a retailer below

The Bottomless Well: The Twilight of Fuel, the Virtue of Waste, and Why We Will Never Run Out of Energy
By Peter W Huber, Mark P. Mills

Cracks in the Ivory Tower: The Moral Mess of Higher Education
By Jason Brennan and Phillip Magness

Icebound: Shipwrecked at the Edge of the World
By Andrea Pitzer

Lifespan: Why We Age—and Why We Don’t Have To
By David Sinclair

In the Garden of Beasts: Love, Terror, and an American Family in Hitler’s Berlin
By Erik Larson

The Fire and the Darkness: The Bombing of Dresden 1945
By Sinclair McKay

The End of Trauma: How the New Science of Resilience Is Changing How We Think About PTSD
By George A. Bonanno