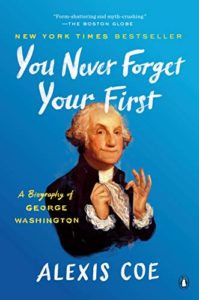 You Never Forget Your First: A Biography of George Washington

You Never Forget Your First: A Biography of George Washington by Alexis Coe.  If you’re a history buff, as we are, you will get a lot out of Coe’s seemingly lighthearted and oft-times irreverent look at George Washington.  We’ve long wished for a fairly dispassionate book about Washington that discussed his good and bad sides without taking snide potshots or putting him on a pedestal. Alexis Coe’s book walks that fine line—perhaps most importantly, she is able to outline Washington’s integrity combined with a deep-rooted racial hypocrisy that is sometimes quite breath-taking. Here’s a sample from the book’s beginning that gives a sense of Coe’s delightful, but deeply thought-provoking alternative take on America’s leading founder:

“All of the Founding Fathers have problems. Thomas Jefferson strikes modern audiences as beyond hypocritical, John Adams as tiresome, and James Madison as downright boring. But according to Washington’s own biographers, he’s in real trouble. Joseph Ellis calls him ‘the original marble man.’ Ron Chernow says he is ‘composed of too much marble to be quite human.’ Harlow Giles Unger says he’s ‘as stonelike as the Mount Rushmore sculpture.’ What is to blame for Washington’s inhuman stature? Well, for starters, his renowned self-control. ‘My countenance never yet betrayed my feelings,’ Washington once said. That was an exaggeration, but he was discreet enough to land himself, as Richard Brookhiser has lamented, in ‘our wallets, but not our hearts.’ Every biographer humbly endeavors to break Washington out of his sepulchre—by proceeding in almost the exact same way as the one who came before him. First, his biographers stick a portrait of the man Ellis calls America’s “‘foundingest father’ on the cover. Many favor Washington’s most iconic image, his rigid and gloomy face on the one-dollar bill, but most prefer a painting that shows his whole body, because his thighs drive them wild. Brookhiser, examining a portrait from 1792, can’t help but notice how ‘well-developed’ they are. Ellis admires how they ‘allowed him to grip a horse’s flanks tightly and hold his seat in the saddle with uncommon ease.’ For Chernow, Washington’s “‘muscular thighs’ were just the beginning. He was a ‘superb physical specimen, with a magnificent physique . . . powerfully rough-hewn and endowed with matchless strength. When he clenched his jaw, his cheek and jaw muscles seemed to ripple right through his skin.’ They pair that visual coffin of a cover with a verbal coffin of a title, often adhering to the same stale format. George Washington: A Biography. George Washington: A Life. George Washington: A President. The more adventurous among them might throw in a hyperbolic word or two (Destiny! Power! Genius!) or a phrase borrowed from Washington’s time, immediately lost on potential new readers (‘His Excellency’ or “‘For Fear of an Elected King’). With titles this stodgy, presidential biographies will always appear as if they are for men of a certain age, intended to be purchased on Presidents’ or Father’s Day. The Thigh Men, as I came to think of these kinds of biographers over the years, are a decidedly ‘size matters’ crowd. Chernow’s book on Washington, which won the Pulitzer Prize, clocks in at almost a thousand pages, a record among single-volume editions on our first president—in no small part because it takes every opportunity to remind readers that the great general was very, very manly.”

CorkScrew Solutions: Problem Solving with a Twist
By Clarke Ching

The Cancer Code: A Revolutionary New Understanding of a Medical Mystery
By Dr. Jason Fung

Going to Extremes: How Like Minds Unite and Divide
By Cass Sunstein

Colour Bar: The Triumph of Seretse Khama and His Nation
By Susan Williams

Think Again: The Power of Knowing What You Don’t Know
By Adam Grant

P Is for Pterodactyl: The Worst Alphabet Book Ever
By Raj Haldar, Chris Carpenter, and illustrator Maria Beddia