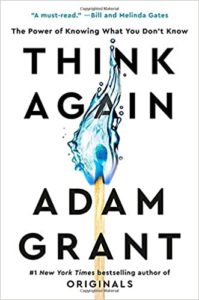 Think Again: The Power of Knowing What You Don’t Know

We have long been fans of Adam Grant, whose powerful book Give and Take is one of our favorites.  His newest book, Think Again: The Power of Knowing What You Don’t Know, is worth the price of the book in the first chapters alone. Grant nails it, for example, with his discussion of the problems of being too smart—as our own Santiago Ramon y Cajal has pointed out, geniuses can flounder not because of their intelligence, but because of their lack of flexibility.  Key graf:

“Mental horsepower doesn’t guarantee mental dexterity. No matter how much brainpower you have, if you lack the motivation to change your mind, you’ll miss many occasions to think again. Research reveals that the higher you score on an IQ test, the more likely you are to fall for stereotypes, because you’re faster at recognizing patterns. And recent experiments suggest that the smarter you are, the more you might struggle to update your beliefs. One study investigated whether being a math whiz makes you better at analyzing data. The answer is yes—if you’re told the data are about something bland, like a treatment for skin rashes. But what if the exact same data are labeled as focusing on an ideological issue that activates strong emotions—like gun laws in the United States? Being a quant jock makes you more accurate in interpreting the results—as long as they support your beliefs. Yet if the empirical pattern clashes with your ideology, math prowess is no longer an asset; it actually becomes a liability. The better you are at crunching numbers, the more spectacularly you fail at analyzing patterns that contradict your views. If they were liberals, math geniuses did worse than their peers at evaluating evidence that gun bans failed. If they were conservatives, they did worse at assessing evidence that gun bans worked. In psychology there are at least two biases that drive this pattern. One is confirmation bias: seeing what we expect to see. The other is desirability bias: seeing what we want to see. These biases don’t just prevent us from applying our intelligence. They can actually contort our intelligence into a weapon against the truth. We find reasons to preach our faith more deeply, prosecute our case more passionately…”

This fascinating book contains so much more, on “idea cults,” the problems with perspective-taking, resisting the impulse to simplify, the difference between skepticism and denialism…  The insights don’t stop coming. Think Again is also a great book for audio.

Order Think Again: The Power of Knowing What You Don’t Know

You can order Think Again: The Power of Knowing What You Don’t Know, using a retailer below