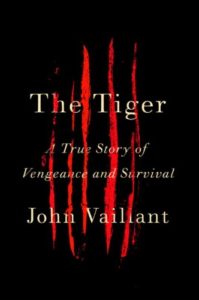 The Tiger: A True Story of Vengeance and Survival, by John Vaillant.  This is one of those books that’s hard to put down, as the story unfolds of a tiger with a lethal grudge against a particular human—a grudge that widened to encompass every human the tiger encountered.  John Vaillant is a magnificent story-teller—this brief excerpt gives hint of his literary prowess: “As the encyclopedic reference Mammals of the Soviet Union puts it, ‘The general appearance of the tiger is that of a huge physical force and quiet confidence, combined with a rather heavy grace.’ But one could just as easily say: this is what you get when you pair the agility and appetites of a cat with the mass of an industrial refrigerator. To properly appreciate such an animal, it is most instructive to start at the beginning: picture the grotesquely muscled head of a pit bull and then imagine how it might look if the pit bull weighed a quarter of a ton. Add to this fangs the length of a finger backed up by rows of slicing teeth capable of cutting through the heaviest bone. Consider then the claws: a hybrid of meat hook and stiletto that can attain four inches along the outer curve, a length comparable to the talons on a velociraptor. Now, imagine the vehicle for all of this: nine feet or more from nose to tail, and three and a half feet high at the shoulder. Finally, emblazon this beast with a primordial calligraphy: black brushstrokes on a field of russet and cream, and wonder at our strange fortune to coexist with such a creature. (The tiger is, literally, tattooed: if you were to shave one bald, its stripes would still be visible, integral to its skin.) Able to swim for miles and kill an animal many times its size, the tiger also possesses the brute strength to drag an awkward, thousand-pound carcass through the forest for fifty or a hundred yards before consuming it.”

In The Tiger, you will learn a great deal, not only about tigers and their remarkably human ability to think abstractly, but about how the Russian Far East is slipping toward ecological imbalance, even as brave conservators work to keep this unique region intact. Highly recommended!

You Never Forget Your First: A Biography of George Washington
By Alexis Coe.