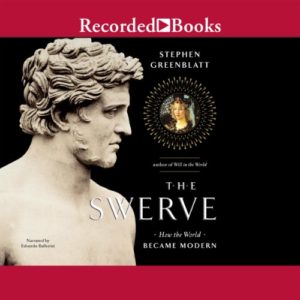 The Swerve: How the World Became Modern

The Swerve: How the World Became Modern, by Stephen Greenblatt. One of the things we love about reading is that it allows us to discover how much we don’t know.  We had no clue, for example, about how the works of ancient Roman writers were able to make their way through two thousand years of mold, mildew, bookworms (the real kind), fire, and purposeful destruction. Greenblatt allows us to follow in the footsteps of Italian politician and humanist Poggio Braccilioni who, in the early 1400s, undertook journeys to northern Europe to seek out such ancient manuscripts as he could find hidden away in monasteries.  By leaning in to Poggio’s methods, we learn how and why manuscripts survived—often under the care of monks who were utterly opposed to the ideas contained in those ancient, heretical documents.  One of Poggio’s discoveries was epic. It was, in fact, Lucretius’s De rerum natura: On the Nature of Things, a poem that spelled out a shockingly prescient worldview of a world derived only of atoms that swerve—not the divine intervention of the traditional Roman deities.

Greenblatt explores the nature of the Italian world of the middle ages, and also shows how important free thought, shocking though it may be, has been for the development of the modern world. The Swerve is a winner of the Pulitzer Prize for Non-fiction. Highly recommended, and an excellent book for audio listening. [Hat tip, Sadegh Nabavi]

Order The Swerve: How the World Became Modern

You can order The Swerve: How the World Became Modern, using a retailer below