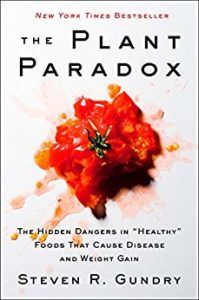 The Plant Paradox: The Hidden Dangers in “Healthy” Foods That Cause Disease and Weight Gain

The Plant Paradox: The Hidden Dangers in “Healthy” Foods That Cause Disease and Weight Gain, by Dr. Steven R Gundry M.D. We stumbled across this book several weeks ago, when we were reading some of the other books on neuro-nutrition. That this is a “most read” book on Amazon, with over 2,000 mostly 5-star reviews, gave us the idea that there might be something interesting going on.  And was there ever! As it turns out, there are highly toxic, plant-based proteins called lectins that are found (as the book description notes) “not only in grains like wheat but also in the ‘gluten-free’ foods most of us commonly regard as healthy, including many fruits, vegetables, nuts, beans, and conventional dairy products. These proteins, which are found in the seeds, grains, skins, rinds, and leaves of plants, are designed by nature to protect them from predators (including humans). Once ingested, they incite a kind of chemical warfare in our bodies, causing inflammatory reactions that can lead to weight gain and serious health conditions.” The Plant Paradox is well worth reading, not least because it also explains why genetically modified foods are not necessarily as innocuous as they might seem.  (The Europeans may be quite right to look at American food products with a jaundiced eye.) We were also surprised to learn why Spanish and Italian milk and cheese don’t seem to provoke the same allergic reaction as their American equivalents—something Barb has frequently observed in her visits to Europe.  Truly a provocative thesis and book.

[Appended by Barb–if you are a vegetarian, you will find this book offers good options for vegetarians. In fact, on Gundry’s diet, you will find yourself eating far more vegetables than the usual American. If you have read take-downs of Gundry’s work by critics who have much to gain themselves by framing themselves as would-be experts, make sure you fact-check those critics by reading Gundry’s book and then looking carefully to see how honest the critics actually are.

I really do also recommend the book The Keystone Approach, which has much the same thesis as Gundry’s book, and is very well-researched. I mean, I’m no nutritionist myself, but I remember back in the day when sugar was a-okay, and fat was the devil—and according to the self-righteous pundits of the day, anyone who said anything different was a complete quack. Pretty much anyone who puts forward a new thesis is going to be criticized by those who see benefit for themselves in being perceived as the expert critics. But there’s some pretty good research evidence that lectins can cause problems in those with the right (or wrong) genetics. (See Cordain, L., Toohey, L., Smith, M., & Hickey, M. (2000). Modulation of immune function by dietary lectins in rheumatoid arthritis. British Journal of Nutrition, 83(3), 207-217. doi:10.1017/S0007114500000271.) Again, take a look at the Keystone Approach.

I have severe rheumatoid arthritis, and the insights in The Keystone Approach and Gundry’s book have been very helpful for me.]

Napoleon: A Life
By Andrew Roberts

In Hoffa’s Shadow: A Stepfather, a Disappearance in Detroit, and My Search for the Truth
By Jack L. Goldsmith

The Order of Time
By Carlo Rovelli

Love Yourself Like Your Life Depends on It
By Kamal Ravikant

The Elements of Education for Teachers: 50 Research Based Principles Every Educator Should Know
By Austin Volz, Julia Higdon, William Lidwell

Eat Fat, Get Thin: Why the Fat We Eat Is the Key to Sustained Weight Loss and Vibrant Health
By Mark Hyman, M.D