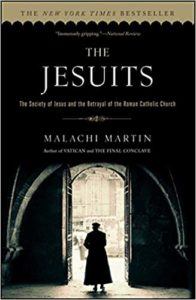 The Jesuits: The Society of Jesus and the Betrayal of the Roman Catholic Church

The Jesuits: The Society of Jesus and the Betrayal of the Roman Catholic Church, by Malachi Martin.  At a time when some public schools are refusing to teach at all in the name of “equity,” (as we mentioned last week), this book is as topical today as when it was first published in 1988.  Martin was originally ordained as a Jesuit priest—he became Professor of Palaeography at the Vatican’s Pontifical Biblical Institute. From 1958 he served as secretary to Cardinal Bea during preparations for the Second Vatican Council, so his knowledge of the Jesuits and the inside history of this important group was unparalleled. (Disillusioned by reforms, he asked to be released from certain of his Jesuit vows in 1964.) Martin makes a convincing case for how the Jesuits used cult-like revamping of the meaning of Roman Catholic vocabulary, such as equating evil with capitalism, that allowed the group to essentially become a Marxist splinter group in direct opposition to Pope John Paul II’s attempts to overcome the evils of communism, particularly in South America. As Martin notes: “Cleverly used, the new ‘theological’ lexicon not only justifies but mandates the use of any means—including armed violence, torture, violation of human rights, deceptions, and deep alliances with professedly atheistic and antireligious forces such as the USSR and Castro’s Cuba—in order to achieve the ‘evolution’ of Marxism and its promise of material success.”

See also Perfect Peril: Christian Science and Mind Control for another example of how cults redefine important words so that when you think you are discussing the same ideas, you actually aren’t—making cult deprogramming all the more difficult. Martin’s views must be taken as a snapshot of the context of the time and his own beliefs, but his careful attempts to be objective contain much worth pondering.

Order The Jesuits: The Society of Jesus and the Betrayal of the Roman Catholic Church

You can order The Jesuits: The Society of Jesus and the Betrayal of the Roman Catholic Church, using a retailer below