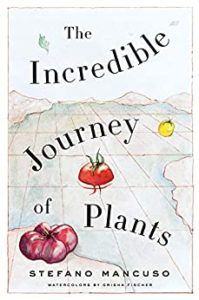 The Incredible Journey of Plants

The Incredible Journey of Plants, by Stefano Mancuso.

Have you ever wondered how avocados spread their seeds when their pits are so large? (Hint, when the mammoths died out, avocados almost did, too.) Or where the world’s most forlorn trees reside? Or what happened to the trees that survived the blast at Hiroshima? This oddly appealing book by neurobiologist Stefano Mancuso of the University of Florence (translated from the Italian by Gregory Conti), describes Mancuso’s unlikely admiration for invasive species and unusual plant survival-and-spread stories.

As Mancuso notes: “One plant that truly has a terrible reputation in many parts of the world, and with all of the national and agencies involved in some way with invasive plants, is without a doubt the Eichhornia crassipes, or water hyacinth. Its rapid diffusion and its sovereign contempt for the vast majority of means with which humanity tries to fight it have combined to make it commonly considered the worst aquatic invasive species known to humanity. Furthermore, it has the dubious privilege of membership in the elite club of the ‘100 worst invasive species’ established by the Invasive Species Study Group… In short, deemed the vegetable personification of evil, it is hated by everyone. Without reservation. As you might imagine, it is exactly the kind of flora non grata that I find irresistible.”