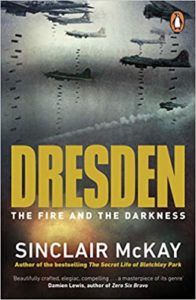 The Fire and the Darkness: The Bombing of Dresden 1945

The Fire and the Darkness: The Bombing of Dresden 1945, by Sinclair McKay.  This riveting book held us spell-bound each evening over the past week—only when sleep called with urgency was Barb able to draw herself away.  It is hard to do justice to Dresden’s horrific bombing, which was, on the face of it, a war crime that killed some 25,000 innocent civilians—many of them refugees—in the final weeks of World War II. Yet McKay does a fantastic job of setting out the context of what occurred, describing the horrors experienced by Jews and anyone else who dared cross the Nazi juggernaut, and how, whatever else it might have done, the savage bombing seemed to have been the final straw that broke the Nazi’s morale.  Even-handed, riveting works of history such as this book are extraordinarily important as nowadays, hyperinflated versions of the Dresden death toll are used by neo-Nazis to support revisionist history. These revised histories give short shrift to the millions of deaths and untold damages that Hitler caused.  The Fire and the Darkness is truly a great book. (Also excellent for audio listening).

Order The Fire and the Darkness: The Bombing of Dresden 1945

You can order The Fire and the Darkness: The Bombing of Dresden 1945, using a retailer below