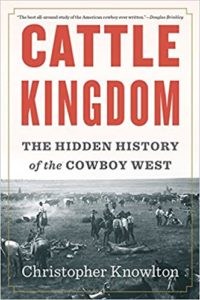 The Cattle Kingdom: The Hidden History of the Cowboy West, by Christopher Knowlton. What an eye-popping read! Many North Americans grow up familiar with cowboys, cattle barons, and the battle of barbed wire fences in the Western US, along with haute cuisine (at least as haute as American cuisine could get) at the legendary Delmonico’s Steakhouses in New York City. And North Americans know at least a little about the meatpacking industry of Chicago and its accompanying scandals.  They may even be familiar with iconic, laconic, literary figures like Shane and the Virginian (an apparent legacy of European aristocracy).

But until the publication of The Cattle Kingdom, few of us had the opportunity to put together the disparate pieces to understand this important era in US history. We know why the buffalo disappeared (a horrific addendum to the genocidal predations on Native Americans), but Knowlton helps us understand how cattle arose so quickly to take the place of buffalo, why the life of a cattleman became so popular, and how the whole enterprise came crushing finale with the Johnson County war, when local newspapers essentially owned by the elite, wealthy cattlemen spurred an insurrection allowing them to quite literally get away with murder.

This is an in-depth look at virtually every aspect of the history of the cowboy west, from the major players (including fascinating discussions of Teddy Roosevelt, the father of the American conservation movement),  to saddles, barbed wire, the economics of cattle rearing, British attitudes of “I can do what I want with my land,” and of course, the “Big Die Up,” where millions of cattle died in one horrific winter—officially sealing the end to the cattle kingdom. From about 1850 to 1900, the US Kingdom of Cattle was the equivalent to today’s Silicon Empire. A remarkable work of history. Also great for audio listening. [Hat tip, Ryan Holiday.]

You can order The Cattle Kingdom, using a retailer below