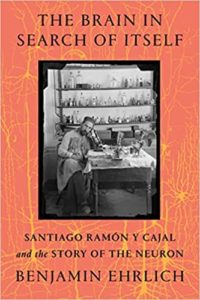 The Brain in Search of Itself: Santiago Ramón y Cajal and the Story of the Neuron

The Brain in Search of Itself: Santiago Ramón y Cajal and the Story of the Neuron, by Benjamin Ehrlich.  What a magnificent book!  Longtime fans of Learning How to Learn know that we’re in turn longtime fans of Santiago Ramón y Cajal, the father of modern neuroscience.  As a youngster, Santiago struggled markedly with his learning, and as this remarkably researched book describes.  We can’t help but wonder whether Santiago might have had dyslexia coupled with dyslexia’s frequent comorbid companion: ADHD. Hints and clues abound through the text:

Cajal was a fabulously gifted and prescient researcher who pushed back against the stodgy “academic reactionists“ who, then as now, clung to outmoded ideas.  (One of Cajal’s colleagues disparaged the new truths of microscopy as “pure fantasy.”) This is a brilliant, beautifully-written book for all who wish to have a sense of how neuroscience was moved to a solid, modern foundation. A great biography of a great man.

Order The Brain in Search of Itself: Santiago Ramón y Cajal and the Story of the Neuron

You can order The Brain in Search of Itself: Santiago Ramón y Cajal and the Story of the Neuron, using a retailer below