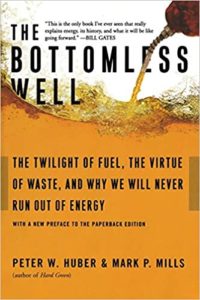 The Bottomless Well: The Twilight of Fuel, the Virtue of Waste, and Why We Will Never Run Out of Energy

The Bottomless Well: The Twilight of Fuel, the Virtue of Waste, and Why We Will Never Run Out of Energy, by Peter W Huber, Mark P. Mills. This book is considered a classic in energy studies, lauded by everyone from Bill Gates to, well, the best economist we know in energy studies, Gabriel Calzada.  And we can see why.  Huber and Mills put it best:

“Energy thus consumes itself at every stage of its own production and conversion, from the grassland on the Serengeti to the gazelle to the black-maned lion of Ngorongoro crater, from strip mine and derrick to the power plant and car engine, and from the direct current (DC) power supply to the central processing unit (CPU). Not just a bit of energy, here and there, but most of it. Over two-thirds of all the fuel we consume gets run through thermal engines—and well over half of it never emerges as shaft power at the other end. Just over half of all the shaft power we produce is used to generate electricity—but another 10 percent of that power doesn’t make it out the far end of the generator. A rapidly growing share of our electricity is now used to transform ordinary grid electricity into computer-grade power—with another 10 to 20 percent overhead in this stage of conversion.

“Some small but growing fraction of high-grade electric power is used to produce laser light—and another 60 to 90 percent, or more, of the electric power dispatched to the laser never makes it into the blinding beam of light. These losses compound from end to end: overall, only 1 to 5 percent (at best) of the thermal energy locked up in the fossil fuel or the enriched uranium ever emerges at the other end of the pipeline, as a laser beam, or a stream of cool air from an air conditioner, or as 200 pounds of 40 mph mom-and-kids; all the rest goes into purifying, conditioning, and tailoring the power.”

This book will change your thinking about energy, which is, no matter how you slice it, crucial for survival and economic growth.

Order The Bottomless Well: The Twilight of Fuel, the Virtue of Waste, and Why We Will Never Run Out of Energy

You can order The Bottomless Well: The Twilight of Fuel, the Virtue of Waste, and Why We Will Never Run Out of Energy, using a retailer below