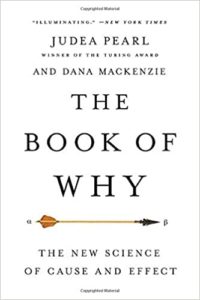 The Book of Why: The New Science of Cause and Effect

The Book of Why: The New Science of Cause and Effect by computer scientist and philosopher Judea Pearl. For anyone with the slightest interest in statistics, mathematics, or figuring out whether the public is being duped by yet another “solidly researched” fad, this book is for you.  Judea himself observes “In Statistics 101, every student learns to chant, ‘Correlation is not causation.’ With good reason! The rooster’s crow is highly correlated with the sunrise; yet it does not cause the sunrise. Unfortunately, statistics has fetishized this commonsense observation. It tells us that correlation is not causation, but it does not tell us what causation is. In vain will you search the index of a statistics textbook for an entry on ‘cause.’ Students are not allowed to say that X is the cause of Y—only that X and Y are ‘related’ or ‘associated.’

But, in large part due to Judea’s research, “…things have changed dramatically in the past three decades. Nowadays, thanks to carefully crafted causal models, contemporary scientists can address problems that would have once been considered unsolvable or even beyond the pale of scientific inquiry. For example, only a hundred years ago, the question of whether cigarette smoking causes a health hazard would have been considered unscientific. The mere mention of the words ‘cause’ or ‘effect’ would create a storm of objections in any reputable statistical journal. Even two decades ago, asking a statistician a question like ‘Was it the aspirin that stopped my headache?’ would have been like asking if he believed in voodoo. To quote an esteemed colleague of mine, it would be “‘more of a cocktail conversation topic than a scientific inquiry.’ But today, epidemiologists, social scientists, computer scientists, and at least some enlightened economists and statisticians pose such questions routinely and answer them with mathematical precision. To me, this change is nothing short of a revolution. I dare to call it the Causal Revolution, a scientific shakeup that embraces rather than denies our innate cognitive gift of understanding cause and effect.”

We love this book, which explains the new science of causality in a straightforward fashion. You’ll find yourself thinking about correlations in a new way.

Order The Book of Why: The New Science of Cause and Effect

You can order The Book of Why: The New Science of Cause and Effect, using a retailer below