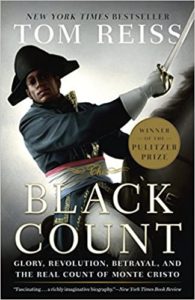 The Black Count: Glory, Revolution, Betrayal, and the Real Count of Monte Cristo

We can always tell when we’ve got a great book to read when we’re so excited about it that we sneak reading in even during the day, when we’re supposed to be working. And just such a book is Tom Reiss’s The Black Count: Glory, Revolution, Betrayal, and the Real Count of Monte Cristo, winner of the Pulitzer Prize for Biography.  This is a stunningly good book—to be deposited on Barb’s shelf of “favorite books of history.”  It’s always fantastic when you read a biography centered around a decent, caring, but daring human being who gives whatever it takes to do it right by his fellow humans.

Just such a person was Alex Dumas, father of the famous novelist Alexandre Dumas, (author of The Count of Monte Cristo and The Three Musketeers—whose key characters were clearly based on aspects of the novelist’s father). Alex, the son of a white marquis and a black enslaved woman, Marie-Cessette Dumas, was the first person of color in the French military to become general-in-chief of a French army. What an extraordinary man!  You can’t help but read about his exploits and come to believe he was an eighteenth-century superhero.

Reiss provides a very different perspective on the French Revolution and its destroyer, Napoleon Bonaparte.  By providing an in-depth perspective of someone who knew Napoleon well, we come to see how narcissistic Napoleon actually was.  And where the French Revolution had begun the process of freeing all enslaved people in French dominions, Napoleon moved to re-enslave them and to re-institutionalize racism in France.  (Somehow, this is never emphasized in Napoleon biographies.)  In the end, however, it is the wonderful exploits of Alex Dumas that makes this extraordinary book such a delight to read. Also fantastic for audio.

You can order The Black Count: Glory, Revolution, Betrayal, and the Real Count of Monte Cristo, using a retailer below