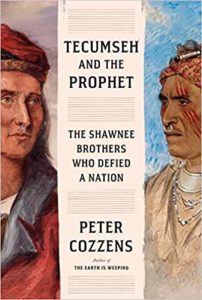 Tecumseh and the Prophet: The Shawnee Brothers Who Defied a Nation

Tecumseh and the Prophet: The Shawnee Brothers Who Defied a Nation, by Peter Cozzens.  Tenskwatawa was a klutz who, as a youth, managed to shoot one of his eyes out with an arrow—he became a debauched alcoholic living on handouts. But, as Cozzens book reveals, after a near-death experience, Tenskwatawa turned away from alcohol and became known as the Prophet. Together with his brother, Tecumseh, the siblings worked hard against long odds to unite Native Americans against the American “Long Knives” who were constantly encroaching on Indian lands.

This fascinating book gives insight into the margins of the nascent United States during the latter 1700s and early to mid-1800s. What makes the book all the more interesting is that, despite the heroic nature of their cause, It’s not like the siblings were perfect people. Tecumseh, who hated torture and treated even his enemies with respect, abandoned women and divorced his wives with the most trivial of excuses, even such minor transgressions as a few feathers left on a plucked turkey. And the Prophet was still a self-serving wheeler dealer even after his near-death experience—although he never drank again.

This fascinating, little known era of history about iconic Americans also is a fine book for audio listening (although you may want to keep your cell phone handy to look up place names). Enjoy!

Negative Self-Talk & How to Change It
By Shad Helmstetter

Beginners: The Joy and Transformative Power of Lifelong Learning
By Tom Vanderbilt

Nonfiction Book Proposals Anybody Can Write: How to Get a Contract and Advance Before Writing Your Book
By Elizabeth Lyon

The Last Assassin: The Hunt for the Killers of Julius Caesar
By Peter Stothard

Inferno: The True Story of a B-17 Gunner’s Heroism and the Bloodiest Military Campaign in Aviation History
By Joe Pappalardo