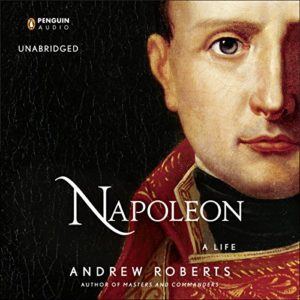 Napoleon: A Life, by Andrew Roberts.  Having read Robert’s wonderful Napoleon, we now realize that we’d had an enormous gap in our understanding of European history—a gap related to Napoleon and the Napoleonic wars. If you’re a biography buff, Napoleon himself was one of the most fascinating characters of his, or any, age.  As Roberts points out: “Napoleon Bonaparte was the founder of modern France and one of the great conquerors of history. He came to power through a military coup only six years after entering the country as a penniless political refugee. As First Consul and later Emperor, he almost won hegemony in Europe, but for a series of coalitions specifically designed to bring him down. Although his conquests ended in defeat and ignominious imprisonment, over the course of his short but eventful life he fought sixty battles and lost only seven. For any general, of any age, this was an extraordinary record. …

“Even if Napoleon hadn’t been one of the great military geniuses of history, he would still be a giant of the modern era. The leadership skills he employed to inspire his men have been adopted by other leaders over the centuries, yet never equaled except perhaps by his great devotee Winston Churchill… The fact that his army was willing to follow him even after the retreat from Moscow, the battle of Leipzig and the fall of Paris testifies to his capacity to make ordinary people feel that they were capable of doing extraordinary, history-making deeds… Napoleon is often accused of being a quintessential warmonger, yet war was declared on him far more often than he declared it on others.”

If you are a fan of either history or biographies, don’t miss this book! But be prepared for battlefield detail—right down to the McDonalds’ parking lot currently located at a once key hillside now called Napoleonshöhe outside Abensberg. Also good for (33-hours-long!) audio listening.

You can order Napoleon: A Life, using a retailer below