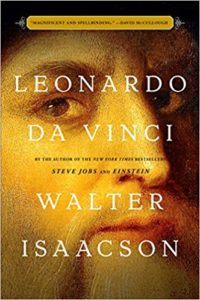 Everyone’s been talking about Walter Isaacson’s latest biography, Leonardo da Vinci, so we had to join the crowd and see what all the hullabaloo was about. (We’ll admit, we’ve previously tackled da Vinci biographies that ended up putting us to sleep, so we were excited to see what master biographer Isaacson would do with Leonardo’s story.)  Isaacson’s book is a stellar exposition of what we know of Leonardo’s life—Isaacson bases much of his writing on what we know of Leonardo from his encompassing set of notebooks.

Da Vinci will always remain something of an enigma, because the inner turmoil he communicated so poignantly in his paintings is not something he described in his otherwise comprehensive notebooks.  So as a biography, Leonardo da Vinci is slightly paler than some of our favorite other Isaacson biographies, including the fantastic  Einstein: His Life and Universe, Steve Jobs, and Benjamin Franklin: An American Life. But our lack of understanding of da Vinci’s inner life is more than made up for by learning of da Vinci’s unparalleled life of curiosity and brilliance. Da Vinci tackled virtually every field of science and turned it into art.  As Isaacson observes, we ourselves can learn to observe life more fully by seeing how the magnificent Leonardo did it.

You can order Leonardo da Vinci, using a retailer below