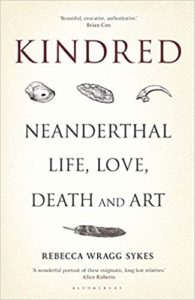 Kindred: Neanderthal Life, Love, Death and Art, by Rebecca Wragg Sykes. We have to admit, like many a fellow Homo sapiens, we’re enamored of Neanderthals. So we were very excited to get our hands on this book. And indeed, Kindred did a great job of pointing out not only the surprising intelligence of Neanderthals and their cunning abilities with stone tools, but also of describing the enormous time spans involved in the Neanderthal sojourn in Europe and parts of Asia.  We did notice that reviewers often observed that the book was “fact packed,” which can often be a bit of code to avoid unkindness.  Sadly, after a while, the facts grew monotonous, while interpretation was often lacking. The lead up to why the Neanderthals vanished was something of a bust—although humans are a reasonable bet to being the culprits, at least in part, we instead hear of inbreeding and disease.

Kindred is an interesting read if you’re into the current nitty-gritty of Neanderthal anthropological findings. But if you’re looking for a more conclusive read, you may wish to wait a few more years until more definitive findings might come available.

You can order Kindred: Neanderthal Life, Love, Death and Art, using a retailer below

Drunk: How We Sipped, Danced, and Stumbled Our Way to Civilization
By Edward Slingerland

The Charisma Myth: How Anyone Can Master the Art and Science of Personal Magnetism
By Olivia Fox Cabane

Set it & Forget it: Are you ready to transform your sleep?
By Daniel Erichsen

The Black Count: Glory, Revolution, Betrayal, and the Real Count of Monte Cristo
By Tom Reiss

Forgetting: The Benefits of Not Remembering
By Scott Small

Cork Dork: A Wine-Fueled Adventure Among the Obsessive Sommeliers, Big Bottle Hunters, and Rogue Scientists Who Taught Me to Live for Taste
By Bianca Bosker