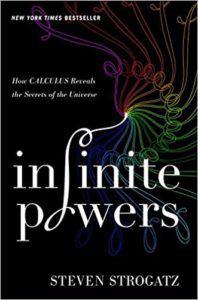 Infinite Powers: How Calculus Reveals the Secrets of the Universe

Infinite Powers: How Calculus Reveals the Secrets of the Universe, by Steven Strogatz. Strogatz is a wonderful writer, and Infinite Powers is a wonderful book about the beauty of calculus. But we hasten to add that you don’t need to know any calculus to enjoy Strogatz’s work. The book begins with a quip that the physicist Richard Feynman made to the novelist Herman Wouk when they were discussing the Manhattan Project. “Wouk was doing research for a big novel he hoped to write about World War II, and he went to Caltech to interview physicists who had worked on the bomb, one of whom was Feynman. After the interview, as they were parting, Feynman asked Wouk if he knew calculus. No, Wouk admitted, he didn’t. ‘You had better learn it,’ said Feynman. ‘It’s the language God talks.’”

So Wouk went on to try—and fail—to learn calculus.  Strogatz continues “It shouldn’t be necessary to endure what Herman Wouk did to learn about this landmark in human history. Calculus is one of humankind’s most inspiring collective achievements. It isn’t necessary to learn how to do calculus to appreciate it, just as it isn’t necessary to learn how to prepare fine cuisine to enjoy eating it. I’m going to try to explain everything we’ll need with the help of pictures, metaphors, and anecdotes. I’ll also walk us through some of the finest equations and proofs ever created, because how could we visit a gallery without seeing its masterpieces? As for Herman Wouk, he is 103 years old as of this writing. I don’t know if he’s learned calculus yet, but if not, this one’s for you, Mr. Wouk.”

This is a timeless book that puts all of calculus into a grand, beautifully written perspective that you’ll enjoy whether you’re a physicist or an English teacher.  Enjoy!

Order Infinite Powers: How Calculus Reveals the Secrets of the Universe

You can order Infinite Powers: How Calculus Reveals the Secrets of the Universe, using a retailer below