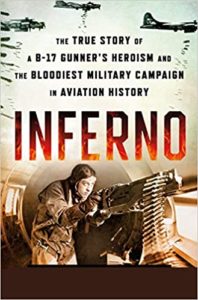 Inferno: The True Story of a B-17 Gunner’s Heroism and the Bloodiest Military Campaign in Aviation History

Inferno: The True Story of a B-17 Gunner’s Heroism and the Bloodiest Military Campaign in Aviation History, by Joe Pappalardo, a contributing editor at Popular Mechanics. A critically important aerial front in the WWII battles against the Nazis was the daylight forays of the US Army Air Force (USAAF) over the skies of Western Europe from 1942 until near the end of the war. Over 30,000 USAAF personnel were killed—as author Pappalardo notes “For some scale, the U.S. Marines suffered 24,500 killed in action during World War II.” Barb’s bomber-pilot-to-be father, Al Grim, caught pneumonia during training in 1942. This nearly mortal illness held him back as his initial pilot training cohort went on to be killed virtually to a man over Europe in circumstances similar to those Pappalardo describes in Inferno. (Barb’s gifted uncle, Rodney Grim, was killed during training when another young pilot rammed his plane, as poignantly described in the Grave Discovery: Discovering Grave Stones and Stories blog.)

Pappalardo uses the unlikely tale of a ne’er-do-well winner of the Medal of Honor, Maynard Harrison Smith, as a narrative device to help readers understand the horrors endured by men who were often facing near certain death. The central sections of Pappalardo’s book, describing what it was like to be flying a burning, just ready-to-snap-apart “flying fortress” while being strafed by German aces, are enough to keep you on the edge of your seat (don’t even try reading at bedtime.) The undercurrent theme of the book is precision bombing—a will-o’-the-wisp target if ever there was one. If you enjoy learning about important, but little-known topics of military history, this book is for you.

Breath: The New Science of a Lost Art
By James Nestor

The Incredible Journey of Plants
By Stefano Mancuso

Leif and the Fall
By Allison Sweet Grant and Adam Grant

Something Deeply Hidden: Quantum Worlds and the Emergence of Spacetime
By Sean Carroll

Teachers vs Tech? The Case for an Ed Tech Revolution
By Daisy Christodoulou

The Biggest Bluff: How I Learned to Pay Attention, Master Myself, and Win
By Maria Konnikova