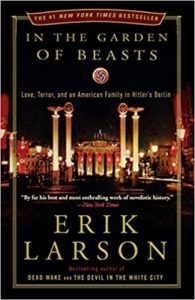 In the Garden of Beasts: Love, Terror, and an American Family in Hitler’s Berlin

In the Garden of Beasts: Love, Terror, and an American Family in Hitler’s Berlin, by Erik Larson. We have read many books over the years about the rise and fall of the Third Reich (including Shirer’s definitive classic by that name).  But In the Garden of the Beasts is one of the best we’ve ever read in describing the gradual unfolding of the evil that was Hitler and his loathsome cronies.  The book follows William Dodd, the unlikely, bottom-of-the-barrel pick as Ambassador to Nazi Germany, and his daughter, Martha Dodd, who slept her way through the top of Berlin’s high society as she merrily embraced Nazism.  But as the Dodds grew more familiar with Germany and the Nazis, they began to appreciate the true horrors of the regime. Martha would become a spy for the communists—only late in life realizing that she had been the dupe of each evil faction.  Larsen’s descriptions are stunningly apropos of the era—and resonate today:

“…Germany had undergone a rapid and sweeping revolution that reached deep into the fabric of daily life. It had occurred quietly and largely out of easy view. At its core was a government campaign called Gleichschaltung—meaning “Coordination”—to bring citizens, government ministries, universities, and cultural and social institutions in line with National Socialist beliefs and attitudes.

“‘Coordination’ occurred with astonishing speed, even in sectors of life not directly targeted by specific laws, as Germans willingly placed themselves under the sway of Nazi rule, a phenomenon that became known as Selbstgleichschaltung, or ‘self-coordination.’ Change came to Germany so quickly and across such a wide front that German citizens who left the country for business or travel returned to find everything around them altered, as if they were characters in a horror movie who come back to find that people who once were their friends, clients, patients, and customers have become different in ways hard to discern. Gerda Laufer, a socialist, wrote that she felt ‘deeply shaken that people whom one regarded as friends, who were known for a long time, from one hour to the next transformed themselves.’ Neighbors turned surly; petty jealousies flared into denunciations made to the SA—the Storm Troopers—or to the newly founded…Gestapo…

This is an absolutely remarkable book of history—we cannot recommend it more highly.

Order In the Garden of Beasts: Love, Terror, and an American Family in Hitler’s Berlin

You can order In the Garden of Beasts: Love, Terror, and an American Family in Hitler’s Berlin, using a retailer below