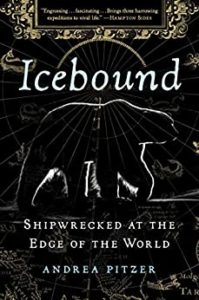 Icebound: Shipwrecked at the Edge of the World

Icebound: Shipwrecked at the Edge of the World, by Andrea Pitzer.  This wonderful book relates the exploits of intrepid polar explorer William Barents, who became a European legend after his death in 1597.  It can be tough to relate the story of a man about whom little is known aside from his occasional appearance in the diaries and reminiscences of others.  But Pitzer provides a great feeling for Barents’ uncompromising goal of reaching China through a northern route.  The true glory of Icebound, however, is Pitzer’s way with words.  Here, for example, is her description of how a ship is built:

“Barents had begun exploration just as the Dutch dominated European shipbuilding. Though the craft was evolving, ships remained in that moment artisanal projects, in which each vessel was made by hand with little in the way of diagrams or written plans. Builders began with a set of blocks in a line on which they set the keel—the spine of the ship. Perpendicular to the keel, arcing planks known as ribs rose to breathe a shape into the cage of the hull. With the ribs in place, planks running parallel to the waterline could be attached, and L-shaped knees set inside to brace and bind the structure. Planks, keels, and ribs were all still cut and shaped by hand. They had to be hammered and plugged, with joining pegs pounded in then cut flush to the exterior planks. One or more decks could be laid to divide the ship into levels, from the cargo hold at the very bottom of the ship; to the orlop in the middle, which held the guns and sleeping sailors; and the upper deck, which sat open to the elements topside. The ‘ceiling’ of the ship—not the roof but the planks along the sides of the vessel—would finish off the interior.”

It is entrancing to read Pitzer’s portrayal of the crew’s exploits, as nearly every day brought an ingenious new escape from death. (Pro tip: Remain armed around polar bears.)  Pitzer herself has travelled to Russia retracing Barents’ voyages—it is little wonder her descriptions are so evocative. An excellent read, especially if you want to appreciate sitting cozily at home on a winter’s eve.

Order Icebound: Shipwrecked at the Edge of the World

You can order Icebound: Shipwrecked at the Edge of the World, using a retailer below