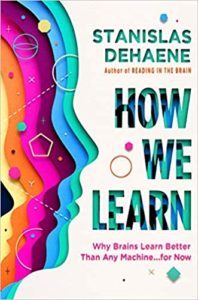 How We Learn: Why Brains Learn Better Than Any Machine . . . for Now

How We Learn: Why Brains Learn Better Than Any Machine . . . for Now, by Stanislas Dehaene. This is the best book around, hands down, on how the brain learns. Part of the brilliance of Dehaene’s book is that he breaks everything down into easy-to-understand insights that allow you to grasp the big picture without getting bogged down in the minutia of complex neural interactions.

Dehaene also describes why discovery learning is so problematic in comparison with explicit teaching: “[Discovery learning] is attractive. Unfortunately, multiple studies, spread over several decades, demonstrate that its pedagogical value is close to zero—and this finding has been replicated so often that one researcher entitled his review paper ‘Should There Be a Three-Strikes Rule against Pure Discovery Learning?’ When children are left to themselves, they have great difficulty discovering the abstract rules that govern a domain, and they learn much less, if anything at all. Should we be surprised by this? How could we imagine that children would rediscover, in a few hours and without any external guidance, what humanity took centuries to discern? At any rate, the failures are resounding in all areas:

If you’re into the neuroscience of learning, you will unquestionably want to read this book. (The last half, in particular, is extraordinarily enlightening.)

Order How We Learn: Why Brains Learn Better Than Any Machine . . . for Now

You can order How We Learn: Why Brains Learn Better Than Any Machine . . . for Now, using a retailer below