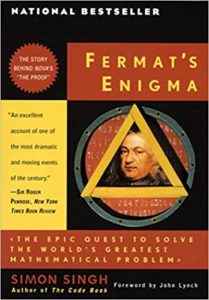 Fermat’s Enigma: The Epic Quest to Solve the World’s Greatest Mathematical Problem, by Simon Singh. Wow, what a book!  You might expect this volume to be the next best thing to Ambien as a sleep-inducer, but instead, Fermat’s Enigma is a real page-turner, providing a dazzling overview of the growth of mathematics from Pythagoras, (whose different way of thinking led to his being burned to death by a proto-cancel culture mob), through Euclid, and on through the early mathematical giants of Euler,  Gauss, Sophie Germaine (a mathematical savant who managed to save Gauss’s life while inadvertently revealing she was a woman), the tragic geniuses Évariste Galois (who wrote as much as he could of his key mathematical discoveries the night before his death), and Yutaka Taniyama (spoiler alert—it didn’t go well for him).  You don’t need to know much more than elementary math to enjoy this book, because an enormous part of the story is the personalities and fascinating lives of the mathematicians. By the time we finally homed in on Andrew Wiles and his solution, we thought—well, the drama is done, we’re back to the humdrum modern world.  But that’s when the book really came alive. Highly recommended!

You can order Fermat’s Enigma: The Epic Quest to Solve the World’s Greatest Mathematical Problem, using a retailer below