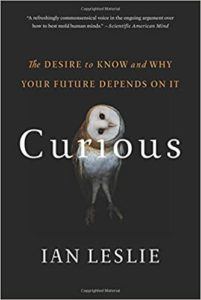 Curious: The Desire to Know and Why Your Future Depends On It

Curious: The Desire to Know and Why Your Future Depends On It, by Ian Leslie. Barb has an upcoming talk for Novartis on curiosity for their Curiosity Week, (it will start with the story of the worst professor Barb ever had, and this professor’s inadvertent role in inspiring the corny video editing behind Learning How to Learn). So meanwhile, Barb couldn’t help but become more curious about curiosity.  Ian Leslie’s book is a scorcher on the topic—highly readable and beautifully researched.  Here’s a sample: “Sir Ken Robinson’s 2008 [TED] talk on educational reform—entitled “Do Schools Kill Creativity?”—has now been viewed more than 4 million times. In it Robinson cites the fact that children’s scores on standard tests of creativity decline as they grow older and advance through the educational system. He concludes that children start out as curious, creative individuals but are made duller by factory-style schools that spend too much time teaching children academic facts and not enough helping them express themselves. Sir Ken clearly cares greatly about the well-being of children, and he is a superb storyteller, but his arguments about creativity, though beguilingly made, are almost entirely baseless.”

This is also a great book for audio.  Enjoy!

Inferno: The True Story of a B-17 Gunner’s Heroism and the Bloodiest Military Campaign in Aviation History
By Joe Pappalardo

Breath: The New Science of a Lost Art
By James Nestor

The Incredible Journey of Plants
By Stefano Mancuso

Leif and the Fall
By Allison Sweet Grant and Adam Grant

Something Deeply Hidden: Quantum Worlds and the Emergence of Spacetime
By Sean Carroll

Teachers vs Tech? The Case for an Ed Tech Revolution
By Daisy Christodoulou

The Biggest Bluff: How I Learned to Pay Attention, Master Myself, and Win
By Maria Konnikova