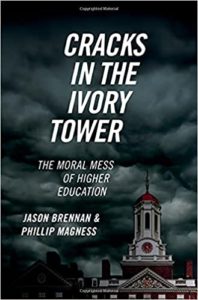 Cracks in the Ivory Tower: The Moral Mess of Higher Education

By Jason Brennan and Phillip Magness

Cracks in the Ivory Tower: The Moral Mess of Higher Education, by Jason Brennan and Phillip Magness.

This fascinating book is framed around an important premise – it’s not that people in a given problematic institution, say, academia, are necessarily bad people.  It is instead that people can have differing incentives and rewards.  As authors Jason Brennan and Phillip Magness observe: “What sets this book apart from many other critiques of higher ed is that we believe academia’s problems are ingrained. Bad behaviors result from regular people reacting to bad incentives baked into academia. No specters haunt academia. Normal people just take the bait.” We might point out that another difference between this book and other critiques of higher education is that it’s pretty funny.

We quibble with Brennan and Magness about a few things.  For example, student evaluations may be problematic, but in our opinion, they’re certainly not worthless.  If such reviews can’t tell how good an instructor actually is, they can certainly give a good sense of how bad they are.  Malign instructors under the protection of tenure can kill student motivation. Just a few of these creatures on, say, an engineering faculty, can result in students—even good students—deciding that by golly, it doesn’t matter if the humanities or psychology might come with a latte-type job; anything looks better than engineering. In any case, we found Brennan and Magness’ focus on incentives to be deeply insightful—this perspective has come to flavor our own analysis of many social interactions.

Order Cracks in the Ivory Tower: The Moral Mess of Higher Education

You can order Cracks in the Ivory Tower: The Moral Mess of Higher Education, using a retailer below