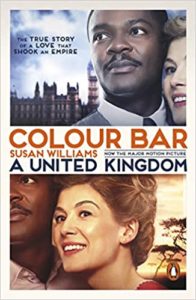 Colour Bar: The Triumph of Seretse Khama and His Nation

Colour Bar: The Triumph of Seretse Khama and His Nation, by Susan Williams, tells a fascinating tale about how love, racism, and politics can intertwine to affect an entire country.  Sir Seretse Khama was born to inherit the throne of leadership in what was then the British Protectorate of Bechuanaland. This area would become Botswana, and Khama was to be elected its first president.  Seretse’s strong stance against corruption has helped make today’s Botswana one of the most advanced, with the highest GDP, in all of Africa.

But behind all this is an extraordinary love story between Khama and his wife, Lady Khama, who was born Ruth Williams, the daughter of George and Dorothy Williams of South London. Initially, virtually everyone who was anyone in both Bechuanaland and England  opposed the wedding—the English because they opposed a white woman marrying, of all people, a black man, and the Botswanans  because they opposed Khama marrying, of all people, a white woman. But the Botswanans were soon to prove much more accepting, while the English powers that be (save for Churchill!) dug in their heels. We found the book to be a bit heavy on the behind-the-scenes political maneuvering—we would have loved to have known more of what Seretse and Ruth themselves were thinking. But then, a biographer can only work with what’s available. How Seretse and Ruth found a way through a world of rampant prejudice is the stuff of legend.

Order Colour Bar: The Triumph of Seretse Khama and His Nation

You can order Colour Bar: The Triumph of Seretse Khama and His Nation, using a retailer below

Drunk: How We Sipped, Danced, and Stumbled Our Way to Civilization
By Edward Slingerland

The Charisma Myth: How Anyone Can Master the Art and Science of Personal Magnetism
By Olivia Fox Cabane

Set it & Forget it: Are you ready to transform your sleep?
By Daniel Erichsen

The Black Count: Glory, Revolution, Betrayal, and the Real Count of Monte Cristo
By Tom Reiss

Forgetting: The Benefits of Not Remembering
By Scott Small

Cork Dork: A Wine-Fueled Adventure Among the Obsessive Sommeliers, Big Bottle Hunters, and Rogue Scientists Who Taught Me to Live for Taste
By Bianca Bosker