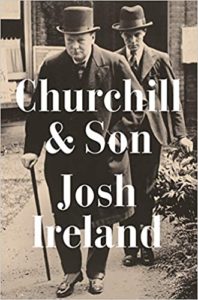 Churchill & Son, by Josh Ireland. Reaching the end of a fantastic book like Churchill & Son is bittersweet. There’s a feeling of satisfaction with the closure, but that satisfaction is mixed with the sad knowledge that you will not be able to return and spend more time with characters and a story you’ve become entranced by.  Winston Churchill is one of history’s astonishing figures—an ostracized man who saw a future few others wished to see. His accurate vision, combined with his ability to unite and marshal his country’s (and others’) forces to combat the Nazi juggernaut was unparalleled.  But when it came to Churchill’s son, Winston took a path that virtually everyone—especially Churchill’s long-suffering wife Clementine—could see was bound for disaster.  By overcompensating for his own neglected upbringing, Churchill groomed his son to become a spoiled, overbearing, overweening character whose descent into alcoholism left him with few friends, and lost him even the respect of his father. As this book so eloquently reveals, being the son of a great man can truly be a curse. This is an amazing behind-the-scenes story of what was really going on from a family perspective during some of the most tumultuous political upheavals of modern history.  This book was hard to put down—highly recommended! (Also good for audio.)