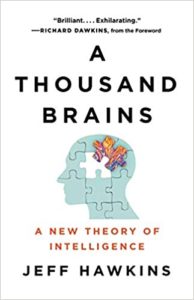 A Thousand Brains: A New Theory of Intelligence

A Thousand Brains: A New Theory of Intelligence, by Jeff Hawkins. Hawkins is a neuroscientist as well as one of the most successful and highly regarded computer architects in Silicon Valley. Some of his scientific papers have become the most downloaded and cited papers in their journals.

A Thousand Brains is one of the most intriguing books we’ve ever read about the brain—Hawkins takes an utterly novel approach to understanding how the brain works.  As he notes:

“People often say the brain is the most complicated thing in the universe. They conclude from this that there will not be a simple explanation for how it works, or that perhaps we will never understand it. The history of scientific discovery suggests they are wrong. Major discoveries are almost always preceded by bewildering, complex observations. With the correct theoretical framework, the complexity does not disappear, but it no longer seems confusing or daunting. A familiar example is the movement of the planets. For thousands of years, astronomers carefully tracked the motion of the planets among the stars. The path of a planet over the course of a year is complex, darting this way and that, making loops in the sky. It was hard to imagine an explanation for these wild movements. Today, every child learns the basic idea that the planets orbit the Sun… Similarly, I always believed that the neocortex appeared complicated largely because we didn’t understand it, and that it would appear relatively simple in hindsight. Once we knew the solution, we would look back and say, ‘Oh, of course, why didn’t we think of that?’”

Hawkin’s book proceeds to lay out precisely those relatively straightforward ideas—often arising from his group’s research—that make the brain much easier to understand.  He also makes a prescient case for why artificial intelligence will advance only by copying the approaches used by the human brain.  Highly recommended for brain buffs and those interested in artificial intelligence.

Order A Thousand Brains: A New Theory of Intelligence

You can order A Thousand Brains: A New Theory of Intelligence, using a retailer below