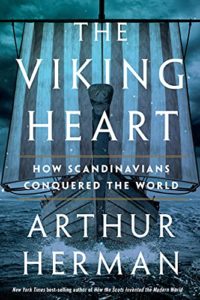 The Viking Heart: How Scandinavians Conquered the World, by Arthur Herman.  Seeing as how 23&Me revealed that Barb is roughly 70% Scandinavian, with intriguing dollops of Egyptian and Eastern European mixed into the gene-pool, she figured it was time to learn a bit more about her ancestry. (And who, she has long wondered, was her “Black Norwegian” grandfather?)

This fascinating book answers all these questions, and many more!  Whether of Scandinavian descent or not, after all, one can’t help but wonder how a small group of Scandinavians perched on the outer edge of Europe could have had such an outsized influence on how European history unfolded.

It all started, it seems, with naval technology:

“The big change came when Scandinavian sailors introduced the square sail, which, when combined with oars for propulsion, turned the Viking ship into an unsurpassed maritime instrument. It made for swift and sure navigation across large bodies of water: comparisons with the flight of birds, made by poets and others, were inevitable… Viking ships were built to last. They were broad in the beam, as buoyant as giant water lilies, and equipped with a new nautical technology: the single oaken plank running along the bottom of the ship, from stem to stern, known as the keel (in Old Norse, kjǫlr), which the Vikings invented in the seventh century. It was the keel that gave the Viking ship its stability in any kind of sea and any kind of weather. A single sixty-foot pine mast (from the Norse word mastr, meaning ‘tree’) raised in the dead center of the vessel, with a three-hundred-square-foot sail attached, gave the vessel the wind power it needed to travel anywhere…. When a Viking vessel had to make its way up a river such as the Seine or the Thames or the Volga, its mast could be struck and laid aside and the oars lowered, so that the crew’s muscle power could take over. Viking ships, with a draft of eighteen inches fully loaded, were well designed for these waterways.”

This book will help knit together your understanding of a small group of people whose influence was broad through history. Now, thankfully, that Scandinavian influence is felt in peaceful realms!

You can order The Viking Heart, using a retailer below

The Bottomless Well: The Twilight of Fuel, the Virtue of Waste, and Why We Will Never Run Out of Energy
By Peter W Huber, Mark P. Mills